The village Kameničky is situated in the nature reserve (Žďárské vrchy), which is the part of Bohemian and Moravian Highlands. According to rough weather and difficult living conditions the area was called The Czech Siberia. Beautiful nature and the location of the Spring area of the river called Chrudimka (originally called Kamenice) makes it an extraordinary place to visit. It also got the award for the most beautiful Czech village in 2001.
The first notes about The Holy Trinity church in Kamenicky were written in 1350. The village name was derived from the original name of the river Chrudimka, which was originally called Kamenice.
During late 19th and the beginning 20th century the village was frequently visited by famous painter Antonín Slavíček. He and a lot of other talented artists were coming here inspired by the book (about this area), which was written by Karel Václav Rais.
Nowadays the village people show their loyalty to the local cultural heritage. That’s why people can visit gallery of A. Slavíček and other art exhibitions.

The village is surrounded by many sights, which are on the list of cultural heritage, such as The Holy Trinity Baroque church (originally wooden), the statue of St. John (1723), the statue of St. Florien (1779), The monument of the victims of WW1, historical buildings and farmhouses (no. 97. and 11.). One of the oldest wooden crosses (in the area) is situated in Filipov. The Wayside shrine with the statue of St. Mary is placed on the foot of the Volák hill. 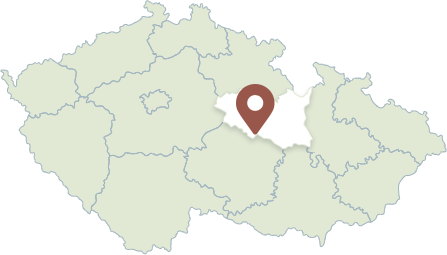